I like Fridays. The boys primary school has an open assembly on a Friday which parents can attend which sets me up for the day, as it usually has the odd moment of utter hilarity, invariably around the hymn, which today was 'I wish I was a wiggly worm'. The words were rib crackingly funny and the school 'orchestra' were so out of time with the whole thing I was pissing myself all the way through. They've made the mistake of giving one of C's hyperactive chums the cymbals which he bashes together with gay abandon at wholly innappropriate moments.

The kids are allowed to talk about their out of school activities, and today one girl got up to show her grade 4 ballet certificate. Cue major dumbass moment from the head teacher. 'Thats very good M, now what grades did you do before grade four ? ' The look on the little girls face was priceless, a nine year old doing an excellent 'go figure you pillock' face.

Talking of pillocks, Ruth Kelly on Question Time last night. Aaaaaaaaargh, I can't bear the woman, she speaks like she's permanently got a gobful of man batter, and she is so badly informed it defies belief. She wasn't exactly up against strong opposition (that irritating little twunt Alan Duncan being one), but she got totally caned. Very worrying that one of such limited abilities holds such a powerful postition.

We've badly screwed up this weekends' social planning. We've invited friends around for dinner on Saturday. There's rugby on all day, which means muggins will be banned from watching in the pub as I'll be a gibbering mess by the time the guests arrive. Doh ! And the France/England game is an evening kick off so I guess I'll be told off every time I slope off to check the score.

To further compound my problems my wife is currently on a train heading for Selfridges in Brum on a day out with her mum and sister, so I anticipate being considerably poorer come this afternoon.

I could really do without being at work today, but I have a site meeting for a major project this afternoon, and as I run my own business, needs must.

I had a fucking awful cluster attack last night. 1.30 am, and finally went back to bed at 3. I feel totally shattered, and for some reason I'd reacted by scratching at my chest and stomach, and have big red weals over both, but have no recollection of doing it. This episode has been ongoing since mid January, and it's starting to get me down. I missed a meeting in Southampton on Monday, as I had an attack at 6 in the morning, but luckily I was able to get down there yesterday.

There is light at the end of the tunnel. I've managed to get an appointment at the London Migraine Clinic to see the country's leading authority on Cluster Headaches. The first thing they'll do is to make sure that my GP prescribes me oxygen for home use, so I can finally get some pain relief. my GP has been pretty good in fairness, and recognises oxygen as a solution, but wants me to go to the surgery to use it. Not much good in the middle of the night. The clinic explained that the average GP will probably only see one or two cluster cases in their whole career, so I suppose it's reasonable to cut them some slack.
Posted by Gumpher at Wednesday, February 20, 2008 3 comments: 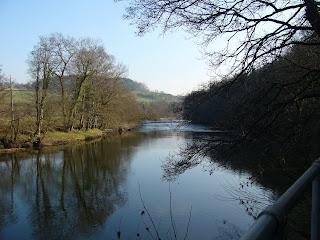 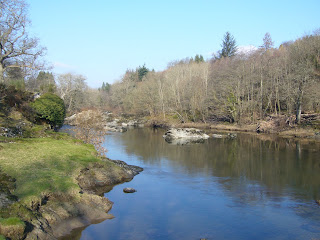 We had a huge walk along the mid section of the Wye Valley near Builth Wells at the weekend.
It's rather pretty, don't you think ? I never mind what the temperature is as long as there's a clear blue sky, it was glorious, but bloody cold, the diesel froze in my car on Saturday night, we had to push it into the sunshine to thaw out ! Parts of the shallows had frozen, which our friends' dogs found very odd, but all the kids had great fun breaking up the ice. We also found a near perfect spot for skimming stones, with a rocky beach chock full of wonderfully flat, round skimmers.
Needless to say, part of the weekend involved the usual session of liver abuse, which made the crisp cold air all the more welcoming.
Posted by Gumpher at Monday, February 18, 2008 6 comments:

We had planned a couple of quiet days at the start of the week, as the boys had gone to my Mums for a few days as it was half term. (Praise be for the gift of grandmothers).

It didn't quite end up as that. We'd just had the dining room decorated, and A wanted 'finishing touches'. Thats woman speak for curtains and cushions. It took all sodding day, Worcester, Malvern, and finally Cheltenham. Still, it was great to have the day to ourselves, we had lunch in Worcester, when we finally acquired the curtains, we had a few beers and then caught the early evening showing of 'No Country for Old Men', which was good in the first half, but faded away somewhat after that, finally followed by a quick bite at Nandos. Went home, got the fire going, a few glasses of wine and then A spanked me at scrabble. Zebra did the damage, triple letter on the Z, and a double word score. How thoroughly middle aged.

As the boys were away, it seemed like a good idea to sort out the playroom. They've got loads of stuff that they never use, and without them being there to bitch about what was going, it was a golden opportunity to do a charity shop run. At the same time I was faffing about with various curtain poles. We finally sat down to eat at 8.30, after working flat out all day. They are messy little buggers, and the sorting out was a nightmare. They arrived home to be greeted by the news of a new regime. A maximum of half an hour computer time each day, which has to be 'earned' in five minute chunks, and can also be taken away in five minute chunks, and a maximum of half an hour of tv per day. You should have seen their faces, you'd have thought we were sending them up chimneys.

As always, it was great to have some time to ourselves, it always goes too quickly. The house is very quiet without the hooligans around, but it's always great when they get back. You can't beat the gentle sound of a five year old and an eight year old battering each other. Soothing.
Posted by Gumpher at Thursday, February 14, 2008 3 comments: 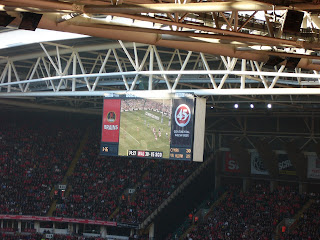 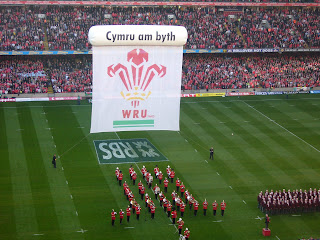 The trip to the match just got better.

Had a phone call late last night and got offered an extra ticket. So I took boy 1. What a great day, he was all togged up in his Welsh shirt and scarf, face dragon painted. His first 6 nations game, and we won.

Look at that view, virtually smack on the halfway line.

What the flying fuck has Rowan Williams been smoking ? I thought he was meant to be first in line on the batphone to the Big G, but it would appear that he spends most of his day sat in a squat chowing down on a crack pipe.

So, certain aspects of Sharia law should be adopted in this country then. Oh do fuck off. Muslims make up around 2% of the population of this country, so why the hell is the political and religious agenda constantly occupied with Muslim appeasment ? Fuck 'em, and while your at it fuck Jews, Anglicans, Catholics, Hindus, Sikhs, in fact every single one of the backward insane divoids who think that 'their' higher being is the 'right' higher being come what may. Religion gets on my fucking tits and it seems to be making a bit of a comeback. Look at that fucktard Huckabee, he wants to be the leader of the worlds largest superpower, and he's a full on religious nutjob, and, people are actually voting for him. I don't know whether to laugh or shit my pants. And our own previous glorious leader kept his own faith somewhat under wraps just in case the great British public thought him a bit odd. No shit hombre.

That bearded arsewipe Williams should keep his moronic opinions to himself, and whilst he's at it, he should get a fucking eyebrow trim, it's not a good look on a man who's trying to come across all serious and if he leaves it much longer he'll need a sodding weedwhacker.

Anyway, the sun is shining, tonight I shall be rustling up a rather juicy bit of cow with a red wine sauce and some pureed parsnip, and tomorrow I shall be hot footing it down the M50 to watch us batter the Jocks. Not all bad then.
Posted by Gumpher at Friday, February 08, 2008 6 comments:

It just gets better

Just found out that I have a ticket for Wales v Italy. Off to check the train timetables.
Posted by Gumpher at Tuesday, February 05, 2008 2 comments:

I shall mostly be watching rugby for the next few weekends as the 6 nations is once again upon us.

If the weeks past indiscretions can be overlooked I plan to be in the pub for most of the afternoon.

Show me the money !