When one is doing the enjoyable jiggy bit that actually creates an infant, unsurprisingly, you're not that preoccupied with thoughts of what the coming years may bring.

There's no user manual either.

Anyway, unless you come from a different planet (or Norfolk, much the same thing) you will know that putting fuel in your car now costs roughly the same as the car itself. Public transport isn't an option, as it never goes where you want to go go, it's usually broken, and generally stinks of piss.

So, when it was obvious that Amanda's car was due a few quid spending on it, we bit the bullet, and have a shiny brand new one of these jobbies turning up on Monday. 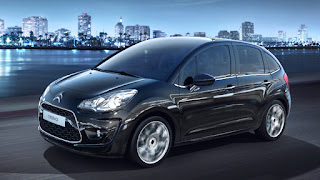 It's pretty dull (to be honest, it's duller than your average Tory backbencher), but is does 75 to the gallon, produces virtually no C02s (so the government doesn't charge you gazzillions to tax it) and it's going to be the Gumpher family mode of transport from now on.

Unless of course, we have to take off fully loaded with the fuckwit spaniel and other assorted paraphernalia, in which case we'll take this, which is mine. 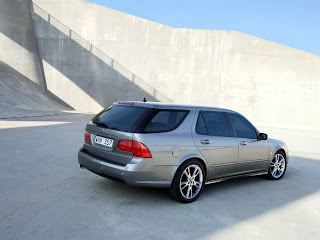 It doesn't do 75 to the gallon, it does however produce more C02s than all the cows in Wales, and as a consequence does cost gazzillions to tax. It has the redeeming qualities of having a flappy paddle gearbox and going like greased weasel shit, which is fab for humbling spotty chavs revving up their burberry infested vauxhall novas, and by the same effect, making one not feel quite so middle aged. I also, ahem, need it for work.

And before you ask, I am not sploffing cash I don't have in these austere times. I stuck it through the business on contract hire. They can have the cocking thing back in two year's time, I'm sick of losing small fortunes on cars.
Posted by Gumpher at Thursday, October 13, 2011 3 comments:

More excited than a toddler full of sherbert

It's World Cup quarter final weekend! And we're still in it!

I am going to struggle to sleep tonight, 6 AM kick off here we go. 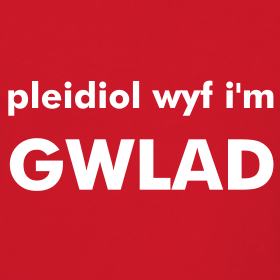 Because I'm worth it

I am not a particularly hirsute man, but nonetheless, I do like to be clean shaven. I appreciate that stubble looks rather fetching on some blokes, the laydeez tell me that some chap by the name of Clooney carries it off rather well. I don't.

If I don't shave for a few days, I don't end up with a even layer of stubble of my face. Oh no. I end up with some strange appendage on my upper lip more reminiscent of a certain seventies style of film where some German chap in tradesmans overalls turns up and knocks on a frauleins door and announces "I am comming to be fixing your pipes, ja?" before lobbing out his purple veined bratwurst, much to the delight of the said fraulein as it makes all of her clothes fall off.

I digress, but it's not a good look.

Anyway, over the years, I've lined the pockets of Gillette and Wilkinson trying out all of their wares with every increasing blades and technology, and do you know what ? They're all shite, and replacing the blades costs about the same as small cottage in Devon. So I went on the interweb thingy, and got myself one of these bad boys. 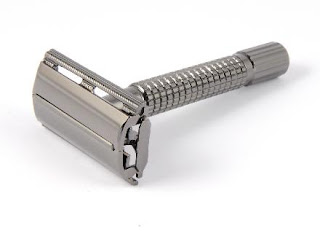 It's luverrley, beautifully engineered and comfortably heavy. It does take me rather longer to get ready every morning. I no longer shave in the shower. Try that with one of these babies and you'll end up with bits of your face all over the tiling. I now lather up in front of the mirror and ponce around, gurning like a loon as I manfully stroke the flashing blade over my fizzog.

It's really rather enjoyable, and my wife is very impressed by the results, even though this morning she told me that "You look like a cock when you're doing that" which I thought was a tad uncalled for.
Posted by Gumpher at Thursday, October 06, 2011 2 comments:
Newer Posts Older Posts Home
Subscribe to: Posts (Atom)