I made the mistake of making my views on onsies rather too loudly within the hearing of my youngest son. We were shopping in Asda and they were selling a particularly hideous selection. I say 'particularly' because they were even more vile than the usual vileness of all onesies.

The comment I passed, which unfortunately he heard, was that anyone wearing a onesie should be shot and then crucified. Josh's mind will always fixate on the shocking, and now each and every time we see anyone in a onesie, or they are mentioned in conversation, Josh will very kindly pass on his father's opinions in a very smug and matter of fact manner.

I've been quite surprised that some people think this to be a rather excessive point of view. Those people of course, being those that have bought the stupid fucking things. It's a fucking romper suit, a babygrow. People who dress up as infants are normally classed as perverts, now it's meant to be socially acceptable? 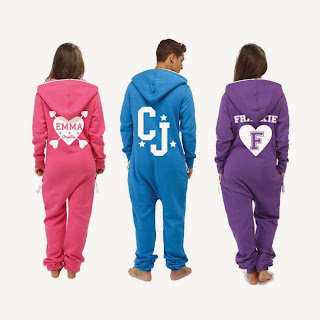 Wearing one of these makes you look a bit of a cunt.

It's that time of year again, I have manthrax. My wife's bedside manner is less the lady with the lamp and more Attilla the Hun, in other words, fuck all sympathy.

That's it really, a rather pointless point, I'm ill, and as is the way of men, I am feeling hugely sorry for myself.
Posted by Gumpher at Friday, December 13, 2013 1 comment:
Newer Posts Older Posts Home
Subscribe to: Posts (Atom)