Having been to The Green Man for the past few years, we decided on a change of scenery for our summer festival trip. After a bit of research we decided on Nozstock on a farm near Bromyard. 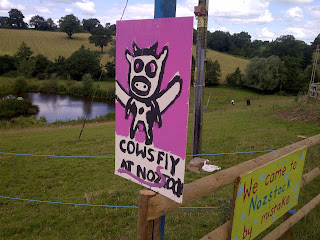 It was a fab choice, a weekend of genuine British eccentricity, helped in no small way by the organisers extremely liberal attitude to the use of soft drugs.I've never smoked spliff, it doesn't agree with me, but I've never seen so many fat biftas in all my years. There appeared to be an ongoing competition to outdo the Camberwell Carrot.

It was themed as 'Myths and Legends' and rather than a music festival, it's set up as a festival of performing arts, so there was lots of quite frankly, weird, but enjoyable shit, going on. Apart from the young couple who wandered around the site and then would strip naked, sing a song, get dressed and amble off to scare other folk. That's not art, it's streaking. They couldn't sing either, and I'm reliably informed by my wife that he had a small penis. It's generally not a good thing to use your wanger as a bit of performing art if it's a tiddler. People will point and snigger. 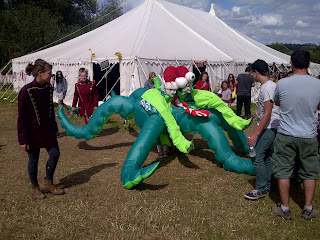 I found the human octopus a bit freaky. They had their own show in the theatre (the tent behind, it was called the 'Bantam of the Opera', vair droll) I didn't go. I did go and see a bit of a show called Artwank. It was a history of early pornography with some seriously wrong black and white footage presented by a rather foxy lady called Ophelia Bits. She was very funny, but I felt a bit odd sitting in a tent watching spank films with strangers, so I left to get more cider. My chums Kate and Al stayed, they were positively lapping up the filth.
The comedy tent was a bit hit and miss, but an act called the Rubberbandits were bloody good. Don't take kids though. 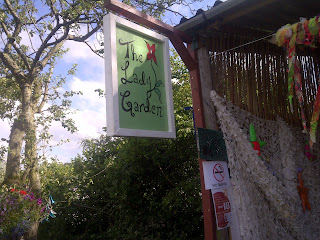 Ophelia Bits obviously had a hand in naming the bar.

It really was a cracking weekend. Charlie thoroughly enjoyed it. There were only 4000 people there, so he and his chum Alf ambled around together, tracking us down when they wanted food and water. It was odd not to have Josh there, he would have loved it. He was have a fab time being spoiled rotten by his Grandma. They went to watch the men's gymnastics at the Olympics!

A couple of bands, I really enjoyed.  Biscuithead and the Biscuit Badgers were perfect for a sunny afternoon with a few ciders. Jonny Kowalski and the Sexy Weirdos were proper ace, as were the Electric Swing Circus. You can see acts who probably will never make the big time, but are incredibly clever and talented and love what they do.

We danced, we sang, we drank cider and lazed about in the sun. I got my mojo back for the weekend. 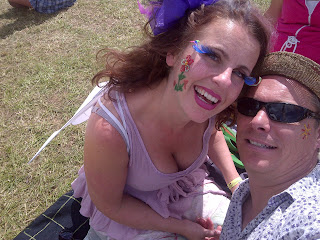