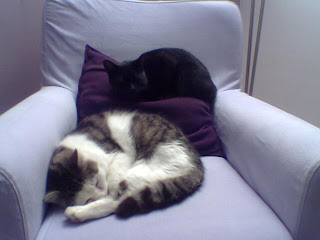 We're all a bit sad in the Gumpher house this morning.

Our eldest cat Harry, the tabby in the picture died yesterday.

He was seventeen, and had a good life, full of love. He was also a bit thick, which made him all the more endearing.
Posted by Gumpher at Monday, June 30, 2008 5 comments:

I've been poo at blogging. Brennig popped in to give me a gee up, and when I checked his blog he has turned into a sex blogger ! Naughty chap. Please, fight the urge to post pictures !

Had a great back to the wilds camping trip with the boys. Dads and kids only. No chicks. One field, one big wood, one tap, two holes in the ground, one firepit. Excellent. The kids found out that life was quite easy to cope with without computers and television, the dad's drank plenty zider and cooked red meat on an open fire. Hear me roar. We were all thrown into the bathroom as soon as we walked through the front door being told that 'You all fucking stink' (out of earshot of the hooligans) Boy 2 was carrying an extra stone as he had refused to crap down the hole for fear of falling in, and sat on the pan making vile noises for some time.

I am still trawling the English countryside spending ever more on fuel. Latest addition to current projects, Wigan. Don't go, or rather, do go, as it will make you feel better about where you live. And as far those tanker drivers holding out for 13% in the current climate, fuck off back to work you work shy slackers. I 'm not that big a fan of generalising comparisons, but I can break the rules if I choose. I don't see that many nurses earning in excess of 30k and turning down 7 %.

My communications are up shit creek. I have a new Blackberry which works as well as a Zimbabwean polling station. Orange have been very helpful, and a replacement is being sent out tomorrow. Thank you for the excellent service. The same cannot be said of talktalk. The broadband has been down at home for six days, and they have overtaken n power as the most useless bunch of cunts I have ever dealt with. If you're going to outsource to a foreign country, at least make sure that your staff have a basic understanding of the language they will be required to operate with. Current situation, in excess of two hours spent on phone calls, no broadband. Fucking chimps.

Although the mighty Welsh got done good and proper by the Saffas, watching Ickle Shane run with ball in hand is a thing of beauty.

Still cycling, playing squash twice a week, but all good work very much negated by too much wine an too many 'occaisional' fags. Jeez, this smoking thing is a bag of old arse
Posted by Gumpher at Monday, June 16, 2008 3 comments:
Newer Posts Older Posts Home
Subscribe to: Posts (Atom)